Omicron -- How bad will it be?

Is it going to spread throughout the world?

This one is a pretty definitive yes.  Since it was first announced Friday, we have found it is in at least a dozen countries.  Countries where it has not been found in (like the US), do little testing and no testing on arrival of international flights.  In the Netherlands, 14 (perhaps more) of 61 passengers with Covid (of 600 on two flights) had Omicron.  Recent reports indicate that the passengers have slightly different strains so did not get it together at a single event in Johannesburg or on the flight (see here: CNN article).  Also, it's clear from the positive rate (nearly 10%) in the province of Guateng (where the outbreak is occurring) that thousands or tens of thousands of people in the province have Covid.  Some will surely be among the many thousands who left over the last week and who will therefore spread the disease elsewhere.

Is Omicron more contagious than delta?

Omicron appears to be quite contagious.  Cases in South Africa went from around 300 two weeks ago to about 3,000 now.  From testing, we know most of these new cases are from Omicron.  Some good news on this front is that the last four days have been stable (cases of 2465, 2828, 3220, 2858, and 2273), but this could just be a brief stabilization that is an artifact of the weekly cycle (which generally has lower cases on weekends, for example), so we need to wait to see if this stabilization is meaningful (see here for details: worldometers site ).  We do not know if it is more contagious than delta yet.

Will Omicron overtake delta and become the predominant strain?

This remains to be seen.  Omicron overtook delta in South Africa very quickly, but cases there were down to 1 in 200K.  With so little Covid going around, a new variant can, and did, take over very quickly.  In Europe and the US, delta daily cases are 1 in a few thousand (or even greater than 1 in a thousand).  This will be a much harder feat.  An earlier South African strain, which evaded some immune response, never made headway in the US or Europe.  A Los Angeles strain, which became quite prevalent locally, also petered out.  In short, just because Omicron quickly took over South Africa does not mean the same will happen elsewhere, and there may be an advantage to our current outbreaks in the US and Europe in that they will make it more difficult for Omicron to take over.

Will vaccines work against Omicron?

This is the big question about which there is almost no data.  I've only read about the status of 2 of the Omicron cases that were vaccinated, and they were both likely asymptomatic (cases discovered only because they were getting tested for a flight).  But this is virtually meaningless--as many cases are asymptomatic in general.

South Africa is not very vaccinated, and many who are vaccinated did not get the superior mRNA vaccines, so the quick increase of cases in South Africa does not mean there were a large number of breakthrough cases.  The vaccine producers are studying how effective they are against Omicron and we'll know much more soon (probably by the end of the week).  The most likely outcome is that there is some protection against infection and serious disease.  If it turns out that the vaccines are as good as they are against delta,  then there is much less reason to worry, and the solution is little different than our current one (vaccinate!).  If not, the vax companies will need to quickly produce an omicron-specific vaccine, in case omicron becomes dominant (this appears to be doable in 3-4 months).

We won't know this for some time.  Hospitalizations are up 4-fold in Guateng (S.A. province where Omicron is predominant) over the last few weeks.  That is scary, but in line with a lagging (hospitalization takes longer) response to an 8-fold increase in cases.  So it looks neither more mild nor more deadly, according to this measure right now (but there's not much data).  See the graph below from South Africa's CDC (see SA National Institute for Communicable Diseases), which shows weekly hospitalizations in Guateng (the latest complete week is 46). 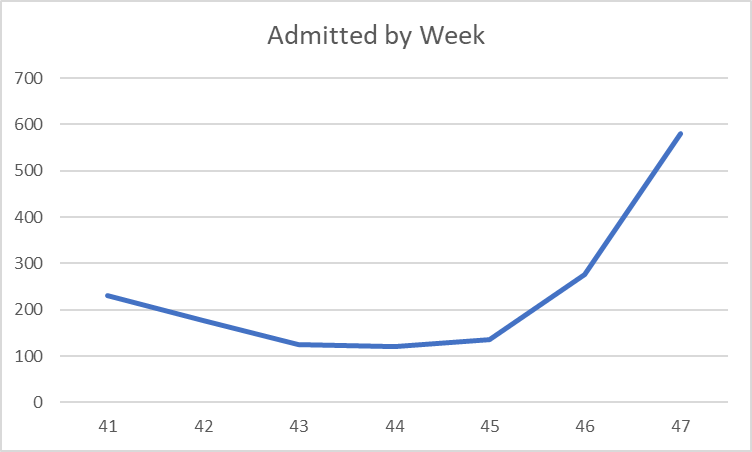 The last couple of days look better BUT this could be a reporting problem (new admissions are not always reported right away).  Below are daily *new* admissions from compiling daily reports for Guateng (see for example: Daily Reports). 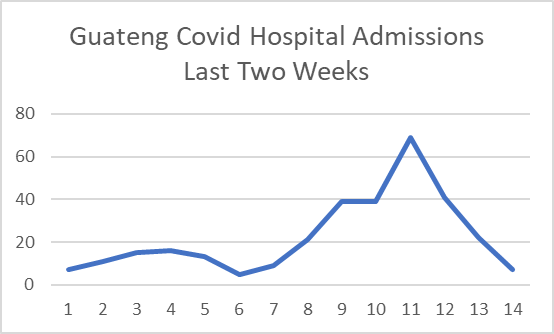 Some other possibly good news regarding deadliness is that wastewater detection of the variant has risen more than reported cases.  This could be that there are a higher number of asymptomatic (or low-level symptom) cases as compared to delta.  See this graph from South African's CDC (in the area of the outbreak- see whole wastewater report here), highlighted on Michael Mina's twitter feed (but note he interprets it differently than I do!).  In short, with the delta wave (peaking around week 25) in South Africa, this level of wastewater Covid contamination corresponded with 10,000 cases in the area and more but we're seeing only a fraction of that right now.  Again, lots of caveats interpreting data like this, but it does leave some room for hope!

We need to wait for more information.  While Omicron is almost definitely in the US already, it will not affect you personally for some time (because case numbers are extremely low).  It's unknown whether Omicron is more contagious, more deadly, or evades vaccines.  There is some good and bad information right now on both sides of these questions.  Right now, cases are increasing due to other reasons, so if you're not vaccinated, get vaxed.  And, yes, this would be the time to get boosted if you're ever going to do it--extra protection the next three months (even without Omicron) is probably the best bang for the shot you'll get, and will reduce transmission.