In just a few weeks, Omicron went from nothing here in NYC to dominating.  To get some context, consider the below graph of case counts for the entire pandemic. 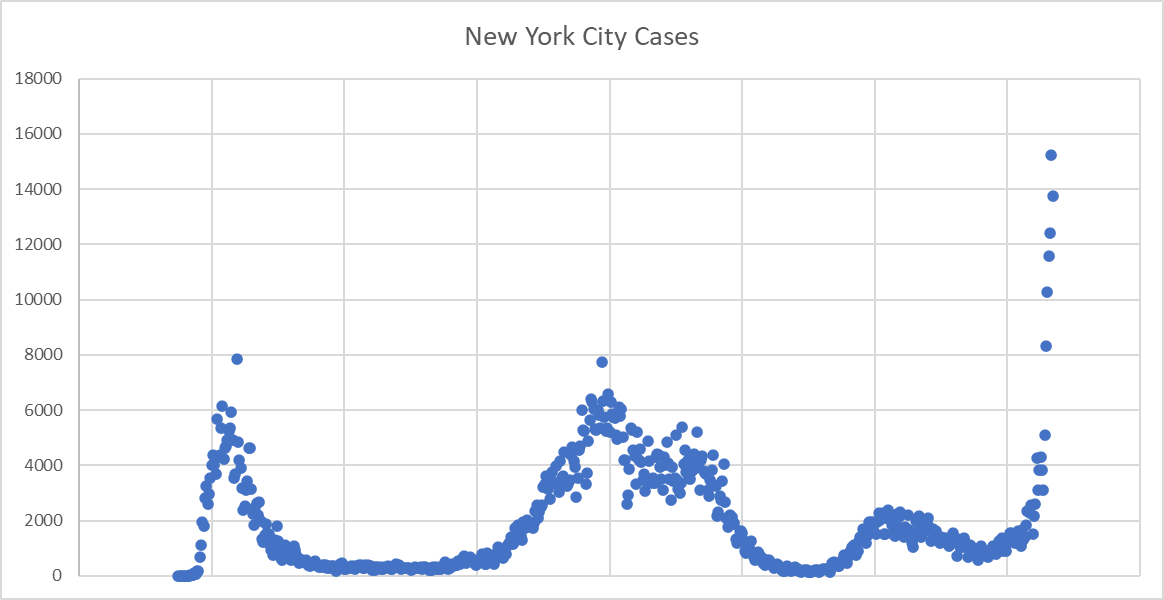 The last 6 days have had higher case counts than any recorded in the pandemic.  It's important to remember that in March and April 2020, we were hardly testing at all, so it's likely cases were as high or higher then.

Nonetheless, the last week has exceeded not only the recent Delta wave but the January winter wave.  There's no doubt that Omicron is extremely contagious, even among people who have been infected, or who were fully vaccinated (and anecdotally, people with boosters).

But the data is a little deceiving.  We are doing much more testing now than we were even a few months ago.  This means we are going to find more cases, all else being equal.  In order to correct for the differences in testing, I used the the percent of test results that were positive and applied that to the average number of tests, going back to November 1 2020.  This slightly biases the days with few tests upward, because generally when the number of tests is small, more people with Covid are getting tested.  I used a two week average to smooth out regular weekly ups and downs.  Below is the adjusted chart. 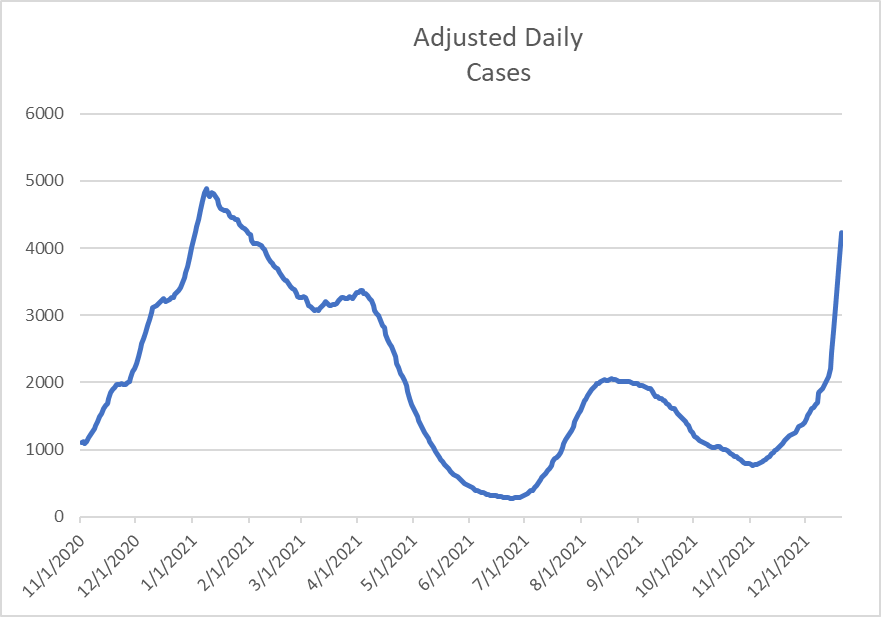 A couple of things to note here.  First, as of now, this outbreak, averaging 4,000 daily cases on a 2-week basis, is not quite at the peak of last winter's outbreak (of 5,000 cases), but is far higher in terms of case count than the summer Delta outbreak, which peaked at around 2,000 cases.  Second, the increase in cases, even adjusting for the amount of testing being done, is much steeper in this outbreak than either of our recent outbreaks.  Since I'm averaging over two weeks, I can also tell you that, unless cases actually drop, we will exceed last winter's case average in another week or so.

So Omicron is bad, resulting in a more dramatic case increase than either of the last two outbreaks, and soon to be a higher daily case count, unless things turn around very soon.  How about severity? There are reports today and some earlier reports is not as severe.  I looked at NYC data to try to figure this out.

For cases, I will use the average of the last 14 days, because hospital admissions are driven by at least the last several days of cases (and not the current days or last day or two of cases).  For admissions, I average a week, because admissions have a weekly pattern that waxes and wanes over the weekends with no relation to who is getting sick but people's schedules.  This smooths the data.

First note that I do not track cases early on, because they are not reliable due to lack of testing.  Thus, the red line only begins Nov 1, 2020, just before the winter wave.  The blue line tracks new admissions from the start and the March 2020 period is far and above the other two outbreaks, hitting the incredible level of 800 per day.

The winter wave peaked at about 300 per day.  The Delta wave, which started in July, peaked at around 100 new admissions a day.

The red case line (which is labeled on the right axis) roughly follows the admissions (at a scale of 16 to 1) through the winter wave.  However, at the beginning of the Delta wave, it begins to depart.  Instead of about 1 in 16 confirmed cases resulting in admission (which is the ratio when the lines overlap), the case line is higher, meaning the number admissions is lower than 1 in 16 confirmed cases.  This departure continues into the last week (which is the Omicron wave).

It's unclear from this small amount of data whether Omicron is less severe still or it's lower observed severity is because the population it is infecting is more vaccinated.  Omicron is even more able to evade vaccinations than Delta.  That makes it appear less severe, because those people are very unlikely to get severe disease.

If that's right, Omicron won't be terrible in NY the way last winter's wave was, even if cases continue to hit all time highs (of course, if cases go high enough, hospitalizations will be higher, even if the percent of cases that lead to hospitalization is lower)

How about places that are less vaccinated?

Some of these places might also be spared, for the same reason South Africa may have been spared-- prior infection also provides very good protection against severe disease.  In many places with lower vaccination rates, Covid attack rates were very high this year, meaning the Omicron infections will not be from a novel disease but one the immune system already knows how to fight.  However, I think these places will be hit harder, because the combination of vaccinations and infections in low-vaccination areas is likely lower in low vaccination areas, particularly among older people, who are the most vulnerable.

So, is Omicron inherently less severe?  I don't see any strong evidence of it yet here, but there are reasons to think its average severity will be lower because the population is more prepared, either accidentally through prior infections or on purpose through vaccinations.

The Latest Variant is Nothing to be Concerned About