April 29, 2013 By Alan J. Salzberg
A North Slope real estate broker (named North) is trying to convince you that North Slope is a more affluent neighborhood than South Slope.  To prove it, he explains that professionals in North Slope earn a median income of $150,000, versus only $100,000 in South Slope.  Working class folks fare better in North Slope also, with hourly workers making $30,000 a year to South Slope's $25,000.

The South Slope real estate broker (named South) explains that North is crazy.  South Slope is much more affluent.  The median income in South Slope is $80,000 versus the North Slope median of $40,000.

Question: Who is lying, North or South?
Answer: It could be neither.
Consider the breakdown of income shown below. 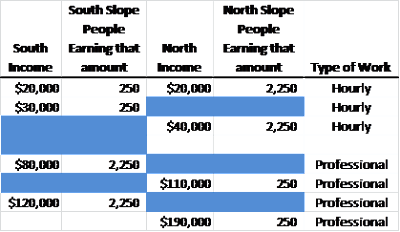 While Wikipedia has an entry for Simpson's Paradox, a specific example of which I described above, it seems that most people are unaware of it.  My motivation for writing about it is not the made-up example I present above but the fact that I encounter it so much in my everyday work.  I either make my clients very happy by explaining that the 'bad' effect they have found may well be spurious or, anger them when I explain the interesting relationship they have found is a mere statistical anomaly.