Are we entering "unprecedented" territory? 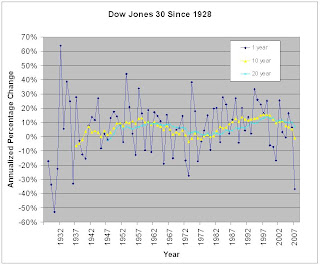 The reports of gloom and doom are abounding, and, I must admit, I believe most of them.

I am going to focus purely on the stock market, because the data is readily available, and because I believe the broader economic problems are only just beginning. My March blog pointed out that in the stocks versus bonds 20-year view, stocks almost always won, but the results are much more mixed over shorter periods. I also need to point out that I overestimated the results for stocks by assuming dividends were not included in the indices. For the Dow indices, the subject of much of that discussion, dividends are included (see the Dow Jones site), so the graphs in that blog are correct, but the numbers should not be adjusted further for dividends, meaning that stocks' edge over bonds is less impressive.

Thus, historically, though not unprecedented, the yearly drop in the Dow is, well, statistically "improbable" (that is, if you base your probabilities only on history). While the 10 and 20 year numbers are much more in line with history, they are still on the low end of the distribution. The last time the 10-year change was negative, as it is now, was 30 years ago, in 1978, in the waning years of very tough economic times.

The next few months will start to indicate how deep an economic hole we've dug for ourselves, but the stock market numbers are not encouraging, and the extent to which the economy is dependent on the market (in the sense that assets are tied to it) seems much more like the 20s and 30s than like the 70s. Let's hope I'm wrong.