Coronavirus Death Rate in US Worst in the World? 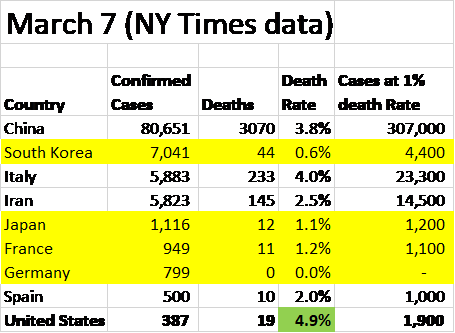 Take a look at the above chart.  The United States shows the highest death rate in the world (deaths divided by confirmed cases) for COVID-19, the coronavirus currently sweeping the world.  There is no indication that the U.S. form has mutated in any way, so why is the reported death rate so much higher?

While some difference in death rates would be expected, the only logical reason for this large a discrepancy is that the death rate is not higher.  Instead there are likely a large number of cases that are unconfirmed, partly or mostly due to lack of availability of testing.  That's probably true almost everywhere, but it is apparently worse in the U.S.  South Korea, which has performed well over 100,000 tests (see S. Korea article), has the lowest reported death rate among the countries with more than 1,000 cases.  If the U.S. death rate is more South Koreas, we have well over 3,000 cases already (or did when the 19 people who died got sick--we would surely have many more by now).  Even if it's a higher 1%, we have 1,900 cases.

What this means is that the virus is probably already spreading without control in some areas, like Washington,  California and maybe New York.  If that is true, then without extreme measures it will spread over the entire country relatively quickly, and it may already be too late to stop it.

New York City: have we hit the peak?

What is R0 and why do you care?

Which state is the next New York, continued.