DeBlasio is spreading lies and panic in NYC. But the real place that should be worried? Florida.

DeBlasio is seeing the result of 1) dramatically increased testing, and 2) people infected days to weeks ago.  He knows this, which is why I say he is lying and not just panicked.  I explained this delay in my last blog (SH blog 57). In short, there is no way, based on current confirmed cases In New York, we can know how the effect of the closure of restaurants and bars and public.

Given that the majority of interactions in NYC right now are only with family, we will see a dramatic decline in cases.  Of course, if anyone in your family has covid, you stand a very good chance of getting it (unless they isolated themselves completely a couple days before they had any symptoms).

So let's turn from that and look at the only data that we can glean something from - deaths.  As I said in the last blog, deaths give us a picture of how widespread the virus was 2-3 weeks ago, because people who die take a few weeks from infection to death (at the median -- meaning half take more time and half take less time to die).

So why am I worried about Florida?  Let's look at the picture as of this morning, in the world and for a few US States, and first talk about Italy. 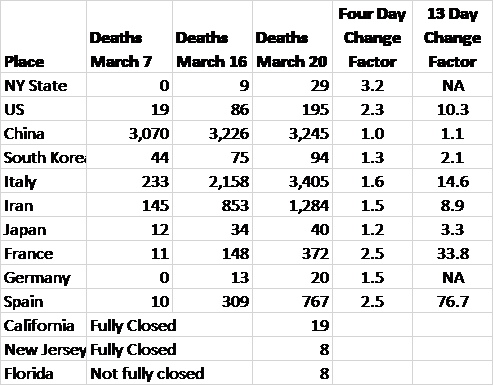 Italy has the most deaths now, and that is the place that everyone is freaking out about.  However, that situation is "under control" with a shutdown that began nationwide on March 9.  This means they are nearing the two-week mark.  Their deaths have increased by 60% (factor of 1.6) since march 16.  That is pretty scary, but the rate of increase is slowing quickly.  Since March 7, Italy's death increased by more than 1400%.  In that light, 60% is not that bad.  And once we get beyond the two-week mark post shutdown, the decline will really begin.

That's not to say there wont be a lot more deaths in Italy to add to an already terrible situation.  On Feb 10 in China, the deaths crossed 1,000, and that was 2 weeks after the near complete shutdown.  China's deaths tripled after that but have leveled now off at just over 3,200.  So, for Italy, we could be looking at 15,000 deaths or more in the next several weeks.  If we are just looking at daily deaths, China's biggest largest number of daily deaths occurred between February 12 and February 23, with the highest day about a month after the shutdown.  So, we can still expect scary numbers coming out of Italy for awhile, and I am not saying we shouldn't be shocked by what is happening and what will happen in Italy.  I'm just saying the damage is done -- we only need to wait for it to play out.

The same is true in New York State.  The mayor's panicking is doing nothing but ensuring that healthcare workers will even be more short of needed supplies like masks than they already are (if that's even possible), because the public has bought everything in its mayor-induced panic.  The state has already done what they need to do in terms of prevention. They've virtually shut down all public places except necessary things like food and drugs. It's too early to predict where NY will end up in terms of deaths, but at this point China was at around 150, so NY may have fewer than China.  We will have to look at it again in 2 weeks.  China was much more extreme in its shutdown but New York was earlier.  My best guess right now is 1,000 - 3,000 deaths - terrible but not catastrophic [and for now I am ignoring the likely re-emergence of the virus months from now]

Now let's turn to Florida.  Listed above are the states with the most deaths.  California, Washington, NY, and NJ are already virtually shutdown.  Florida, with only 8 deaths, is not.  They should be.  New York shut down at 9 deaths.  If Florida waits any longer, they will almost surely be worse than NYC.  I suspect it will be worse there anyway -- their demographics are much worse, with a high percentage of elderly people.  Also, they seem to have done almost nothing to stop the spread by identifying and tracking cases (New York focused on this relatively early).

We'll revisit this in a few days, but I think California and NY are in about the same place, with what I think will be deaths of 1,000 or in the low thousands in the next 6 weeks, whereas Florida will be worse, unless they take similar action today of closing all bars, restaurants and non-essential businesses.

Effectiveness of long-term Lockdowns, and other Myths

Four Graphs that Show the Pandemic has Peaked. Is it time for another lockdown?