Which states are the next NY?

You've probably heard a lot about New York being the center of the outbreak in the US.  That's true, but due to their testing, NY looks much worse than other areas when it's only a little worse than some.  What areas should we be worried about?

The Times has an interactive graphic where you can see deaths by state, but unfortunately you cant download the data, so I have a total of two days data for each state.  I also have been vaguely tracking Georgia and Louisiana for a few days.  Here are the states with the most deaths. 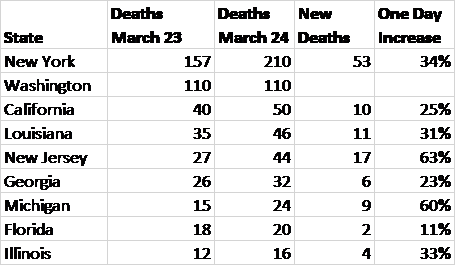 Keep in mind that we only have one day of data, so the percent increase could be far from the right number if we looked over several days.  Still, except for Washington (no data today, but a very slow increase the last few days) and Florida, every state is increasing by at least 20% PER DAY.  A 20 percent daily deaths more than double every 4 days (remember compounding interest--this works the same way, so it's not 5 days for a 20% rate to double is a little less than 4).

Louisiana is scarier than NJ to me, because Louisiana has a much lower population (about half), so the fact that they have more deaths does not bode well.  Plus NJ has been in a near shutdown for more than a week while Louisiana much less so.  Florida's increases are smaller today, but I continue to worry because the demographics there are very bad--there are a lot of elderly.  Also, Florida, infamously now, did not shut down much until this weekend, and much of Florida remains open.

So I'll track this more in coming blogs, but to me, Georgia and Louisiana are worrisome, because they have similar numbers of deaths as much larger states but have not closed everything down.