Olivia Hebner's blog on Friday indicated that NYC may have hit a peak (see it here).  Today's post, with new data, appears to confirm that.

I've updated all states and New York City with the latest data.  This time, instead of graphing total deaths, I graph daily deaths.  For New York City, this is the people who died on a particular day from COVID-19.  For all other localities, this is deaths that were reported that day (many of which may have happened days before).  As with the graphs of totals, this is graphed on a log scale, meaning a straight line is the dreaded exponential increase.

I did not graph the last day of reported deaths, because many of those reports are not complete.  Even without this, you can see how jumpy the graphs are.  My guess is that this is due to poor reporting consistency rather than actual changes in the number of deaths.  I could have "smoothed" the graphs using 2 or 3-day averages, but chose not to, as it is not clear what the correct smoothing is, and in this way, you can better understand how poor, or at least unclear, the data trends are.

Still, some of the news is good.  NYC has clearly not been increasing exponentially for several days, and has even begun to drop.  Louisiana and Michigan have appeared to flatten some (though I fear this is due to poor weekend reporting and that deaths will increase again once weekday numbers come out).

Italy's graph tells a lot: 1) the peak was hit around 2 weeks ago, and 2) deaths have still not dropped that much.  This means that even for New York, the totals will keep piling up for some time.  Keep in mind that I define the peak as when the increase ended, but the actual maximum number may occur a few days after.  Also, the long plateau at the peak that we see in Italy is expected based on the nature of COVID-19.  Sick people who do not recover are often sick for a long time,and about half of the deaths are after more than 3 weeks of being ill.

A piece of bad news is that this weekend, there was a New York Times report that many of the deaths, especially those that did not occur in a hospital, have not been reported as COVID-19 deaths.  Therefore all these totals may be under-estimates, and furthermore, the under-estimates may have increased as NYC and other locales have restricted who is hospitalized due to capacity concerns.

But let's get back to the hopeful sign: we do seem to have hit the peak in NYC.  Given our closure date of about 3 weeks ago, it means most locales will also hit their peak soon (since most locales closed 2-3 weeks ago). 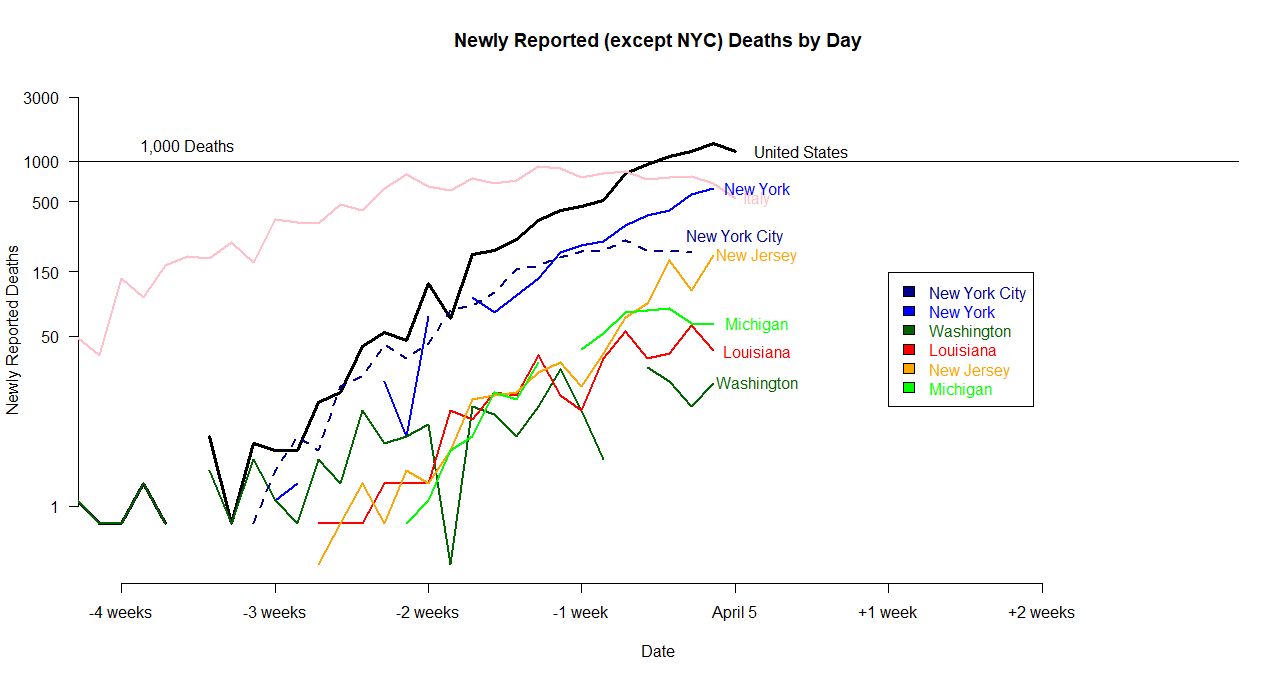 A note on the data.  For reported deaths, I use this site, which I find lines up with the New York Times and JHU data (though not perfectly).  For the NYC DOH data, I use their Department of Health site, where you can click through to various downloadable data on their github.  NYC DOH lags and is different from the other data, because NYC DOH uses dates of death rather than date reported.