Josh Lafair is guest blogging again. This time, he is comparing his home town of Austin, which shut down just days after its first case, to Nashville, which waited two weeks.  Thanks Josh!

In my last post, I discussed the importance of reducing R0, the average number of new infections caused by each infected person, to below one in order to flatten the curve. This time, I want to explore how my home town, Austin, Texas, reacted to COVID-19 differently than Nashville, Tennessee, and use that information to predict each city’s respective outbreak. While Austin has almost twice the population, both cities are structured around a major college and are considered to be similar.

On March 17th, four days after Austin’s first recorded case, it had 6 total cases, and the Mayor ordered all bars and restaurants to be closed and limited social gatherings to less than 10 people.

While the lines appear parallel now, the later shutdown in Davidson appears to have allowed the case increase to continue on a steeper curve for longer (as always, the graph is on a log scale, so a straight line increase means exponential growth). 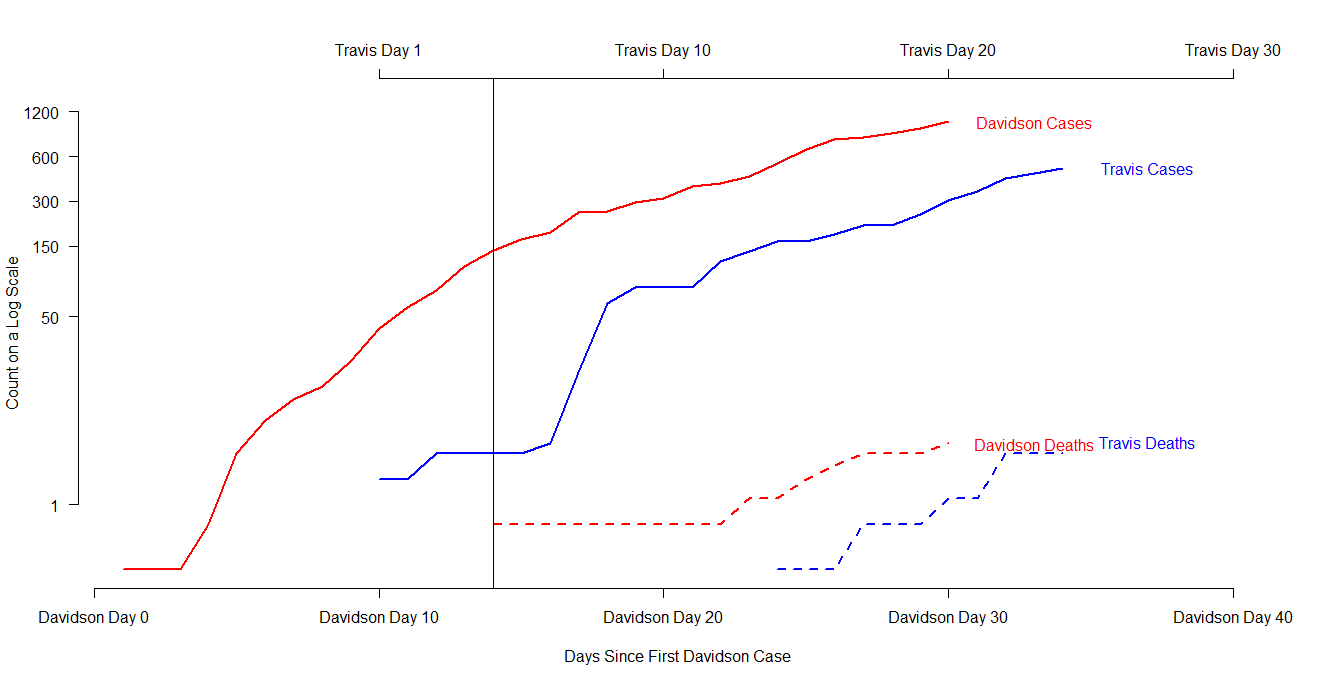 Let's again look at the timeline.

Data from numerous sources suggest that it takes at least two weeks for someone with COVID-19to die. They also hypothesize that the death rate is around 1%. Using these numbers, it becomes clear that around 200 people were infected with COVID-19 in Nashville on March 7th, two weeks before there were any government closures.

So, what does this all mean? It’s hard to tell how bad each city's outbreak will be or already is because of the lack of testing kits. The numbers I’ve provided in terms of deaths are obviously rough. Evidently, at this point, all data associated with COVID-19 has been uncertain, and it almost always underestimates the situation a city is in. However, if city closures are as effective as everybody believes they are, Austin will probably peak earlier than Nashville, and Austin’s peak will be less severe, because the city began closing down earlier relative to its first recorded case.