Is the pandemic over in NYC?

Stir crazy from being locked down for months, my family and I rented a place near a very quiet beach in South Carolina 4 weeks ago.  When we left New York City, The number of new confirmed COVID cases daily was more than 1,000, indicating many thousands of people were contracting the disease daily (since the number of confirmed cases is only the tip of the iceberg). (A good place to get the raw data for NYC is here: https://data.ny.gov/browse?tags=covid-19, where you can aggregate the five counties that make up NYC.)

Now we've been back one week.  Yesterday, there were 345 new confirmed cases in New York City.  In the last week, the daily average has been under 400.  This dramatic change occurred even with the thousands of people who have come out in the last three weeks to protest, and has occurred even with the loosening in social distancing that has come with quarantine fatigue.

Keep in mind, though, that the percent positive generally over-estimates the percent who are positive in the population, because those getting tested are a non-random sample, and they are more likely to have symptoms/contact with infected people.  Thus, the people who are getting tested, by and large, are more likely to have COVID.  This means that on March 29, for example, when 61% of those tested were positive, the percent who actually had COVID was much lower.  We now believe that about 25% of the population of NYC had COVID at one time or another over the last six months, and not all of those had it on March 29.  Thus, that 61% was a very substantial over-estimate.

The blue line in the graph below shows the percent positive over the course of testing in NYC (the orange bars show the number of tests). 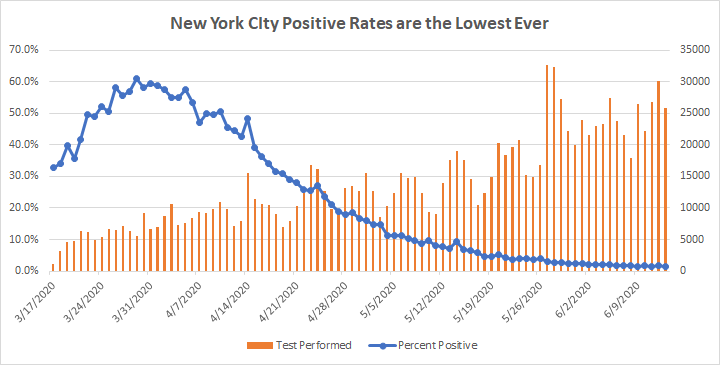 By mid-May, the percent positive had fallen dramatically, to about 6%.  Now, and for the last week, it has been below 2%, and yesterday it stood at 1.3%.  As this is still likely a significant over-estimate of the prevalence of COVID in the population, the percentage of people infected in the population is likely well below 1%.  Also, it has been steadily dropping now for more than 2 months. Part of this drop in the percentage is due to the fact that we are testing more broadly.  However, the number of tests per day has varied little in the last month but the percentage positive has still dropped to about a quarter of what it was in mid-May.

This is very good news.  The outbreak is over, for now.  Many believe the next outbreak will occur in a few weeks or months.

Can we do more to make sure the next outbreak is smaller, or does not occur?  I think so, and I wrote about it in a recent blog on how we can re-open: https://salthillstatistics.com/posts/73 .  Unfortunately, it appears the measures and rules for a return to work which have proven effective elsewhere in the world are largely or completely being ignored here.

Still, I believe a second outbreak will be far less severe.  Why?  Three reasons: 1) even as we relax restrictions, there is increased awareness and increased care taken compared to late February and early March, 2) a substantial number of people have gotten the disease--not nearly enough for herd immunity, but enough to reduce the infection rate, and 3) for many jobs, there has been a semi-permanent shift to working from home and reducing office capacity, meaning that even when we return to work, the subway and workplaces will be much less crowded than before.