Is the United States Really that Much Worse than Europe?

Today we have a guest blogger, Jay Westreich, who works at my partner firm Summit Consulting.  Jay has been tracking covid state by state (you can see more at jayscovidgraphs.com).  Take it away, Jay!

There's been a lot of news recently about how the United States has more cases than anywhere in Europe, and that the United States is seeing a resurgence of cases, unlike Europe. Many have seen a graph like the one below, where new cases in the US seem to have peaked in early-mid April, began to slowly come down, and then started growing again in June. Compared to several European countries, this appears to be a uniquely American problem. Even when controlling for population, America’s new case count is much higher now than any European country, and new cases in America are growing quickly, whereas Europe is showing healthy declines.

Are the number of new daily cases in the US higher now than they were in April? Yes. However, this oversimplifies what is happening. I broke up the US into four regions as shown below.  When looking at new cases by region, patterns emerge which suggest there is not one outbreak in the United States, but rather multiple ones, each peaking at different times and heights. 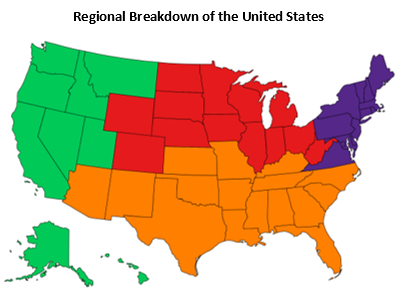 The four graphs below show the patterns in four regions of the US, with the individual lines in the graphs corresponding to individual states within each region.  The northeast saw a large spike in April but has been consistently coming down since early May, to where it now has fewer new cases per 100,000 residents than any other region (the lone exception is Delaware, which seems to be seeing an increase in new cases in the past week). The midwest had a slightly later spike that was much more mild. The south and west did not see any kind of spike until early June, the south having a more severe spike than the west. 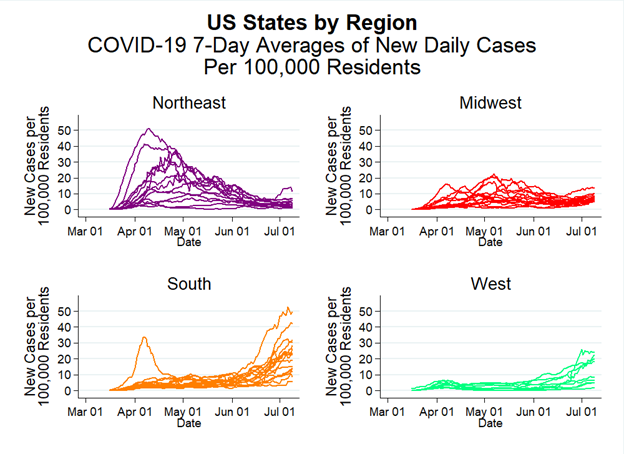 This suggests that there is not a resurgence, if you define a resurgence as new cases going up, coming down, and then going back up again. Rather, there are four different surges of the virus that started at different times. Florida and California, despite seeing significant early cases, did not see a true spike until more recently, which is in sharp contrast to New York and the northeast. The south and west are only now experiencing what the northeast experienced in early April.

Another important takeaway from this graph is that the surge in cases in the northeast has come down significantly. This was the first surge in the United States, which means that when the virus was first tracked in America, it was largely being driven by this region. When new cases in the northeast started to come down, it appeared that the whole country was seeing a decline too. That was until the virus spread to the rest of the country. Now, the progress of the northeast is overshadowed by the outbreaks in the rest of the country.

Now that we can isolate different outbreaks across the country, how does the United States compare to Europe? Sadly, we are still much worse, as shown in the side-by-side graphs below. Even when controlling for population, the spike the northeast experienced in April was worse than even the most severe outbreaks in Europe, such as in Spain and Italy. The surge in cases the south is seeing now is also more severe than what happened across Europe, and the west looks poised to follow suit. While the size of the outbreaks might be a uniquely American problem, there is evidence that new cases can come down in America too. If new cases can decline from Jamestown to Plymouth, they can decline in the rest of the country too.  However, the experience of the northeast and Europe is that this decline will only follow re-closing most indoor venues, including workplaces, bars, and restaurants, and it's not clear whether the individual states have the will to do so. 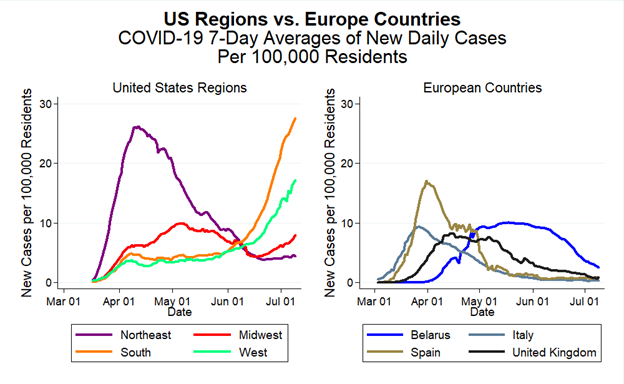