Across the Southern US, from Florida to California, cases are rising.  In Florida and Texas, record cases and deaths seem to be recorded daily.  Where is it headed?

Let's first talk about the case fatality rate (CFR), which is the number of deaths per confirmed case.  The CFR was around 8% in some early outbreak states: New York, New Jersey, Massachusetts, and Michigan.    This is not to be confused with the infection fatality rate (IFR), which is the number of deaths per infection.  The IFR was probably closer to 0.5% (1 in 200) in these states (the IFR is discussed here: https://salthillstatistics.com/posts/80 ) .  This difference, of a factor of more than 10, must be because most cases of COVID were never confirmed.  Why? because the only difference in CFR and IFR is the denominator: confirmed cases in CFR and infections in IFR.  For the IFR to be less than 1/10th the CFR, infections need to be more than 10 times confirmed cases.  That part is simple math.

One of the claims the Florida governor has been making is that the increase in cases is due to increased testing.  If that were true, we'd see lower CFRs in FL.  We are.  The CFR in FL is about 1.5%, according to a simple regression model using the last three weeks of deaths versus the last 6 weeks of cases (because cases occur about 3 weeks before deaths).  In other words, Florida's CFR is about one-fifth that of New York's.  The CFR has also fallen because recent cases have tended to be among younger people.  For younger people, the risk of serious infection or death is a fraction of the risk of death for older people.

Looking across the southern US, CFRs are all much lower, indicating increased testing, a younger infected population, or both.  What does this mean for fatalities in the coming weeks?

I've separately modeled each of 7 Southern states to estimate their number of deaths over the next three weeks. Texas and Florida are likely to see increased fatalities in the next 3 weeks, likely doubling and surpassing 200 per day in these states.  Still, their daily deaths will be nowhere near the 1,000 per day that New York was at its peak, unless their cases continue to increase.  Texas and Florida could also worsen if recently infected young people begin to spread the virus more to older populations (following a model that young people get infected early and then infect their older relatives).

For other states, my modeling indicates that deaths will increase, but not as fast as Florida and Texas.  In Arizona, it appears the peak number of cases has already been reached, meaning the number of deaths will hit its peak in about a week or so, and then drop.

How about after three weeks?  That all depends on whether the virus is curbed, either by chance or by design, in the future.

The graph below shows the expected deaths according to the models I developed (dashed lines) versus actual deaths (solid lines) for seven selected states. 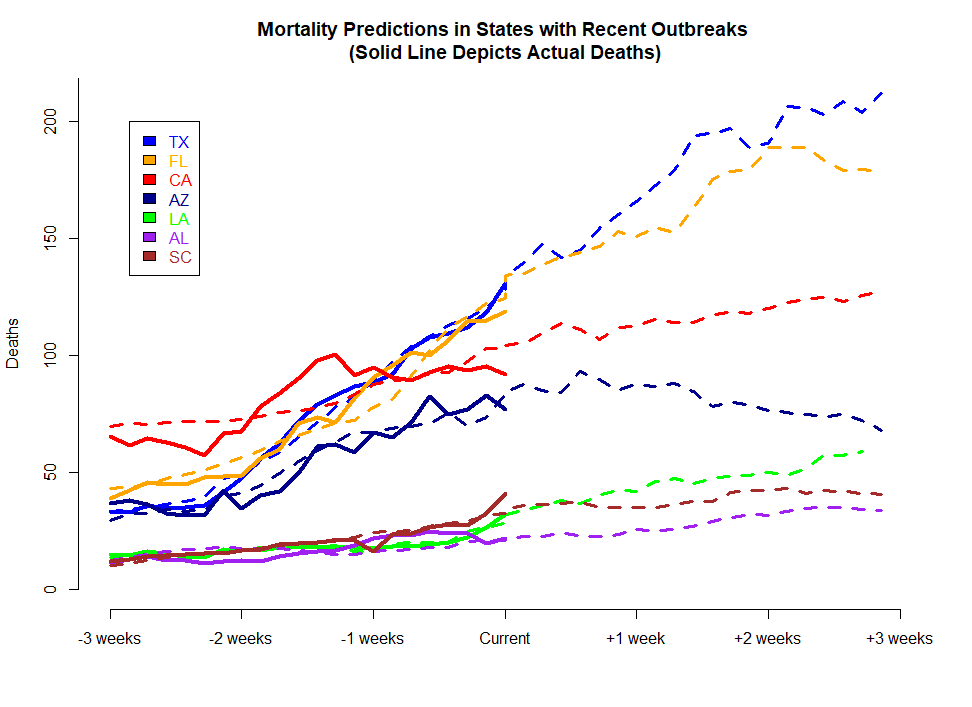