How bad will December be?

However, cases have risen dramatically in the last 6 weeks.   November will have nearly as many as we had in May (close to 40,000).

And December?  December will be the worst month so far -- we could easily have around 85,000 US deaths from COVID in December.

How do I come to this grim estimate?

You might remember that in prior posts I have mentioned the CFR, or Case Fatality Rate.  The CFR is the number of deaths divided by the number of confirmed cases, typically expressed as a percentage. If the CFR is 10%, for example, then for every 100 confirmed cases, 10 people die.  Recall that the CFR differs from the IFR (infection fatality rate).  Because we track deaths very well but miss most cases, most infections do not become confirmed cases and therefore the CFR is much higher than the IFR, so please do not take the figures below as the COVID death rate.  I estimate the IFR to be around 0.3% at this point, but that is irrelevant to this discussion.

The CFR was more than 50% in March, as we had very few confirmed cases back then.  By the end of May, the CFR was around 5%, due to increased testing.  The CFR has continued to fall, due both to increased testing and also due to improved treatment (fewer deaths).  By July 1, the CFR was 3.2%.  By Aug 1, 2.2%.   By Sep 1, 1.7%.  On both Oct 1 and Nov 1, it was 1.8%, the slight increase perhaps a reflection of new outbreaks where less testing was being done.  Still the seven day average has been remarkably stable for the last 3 months, rarely rising about 1.8% or dropping below 1.7%.

The graph below shows the deaths versus 3-week lagged cases (both as a 7-day average), and show surprising consistency. 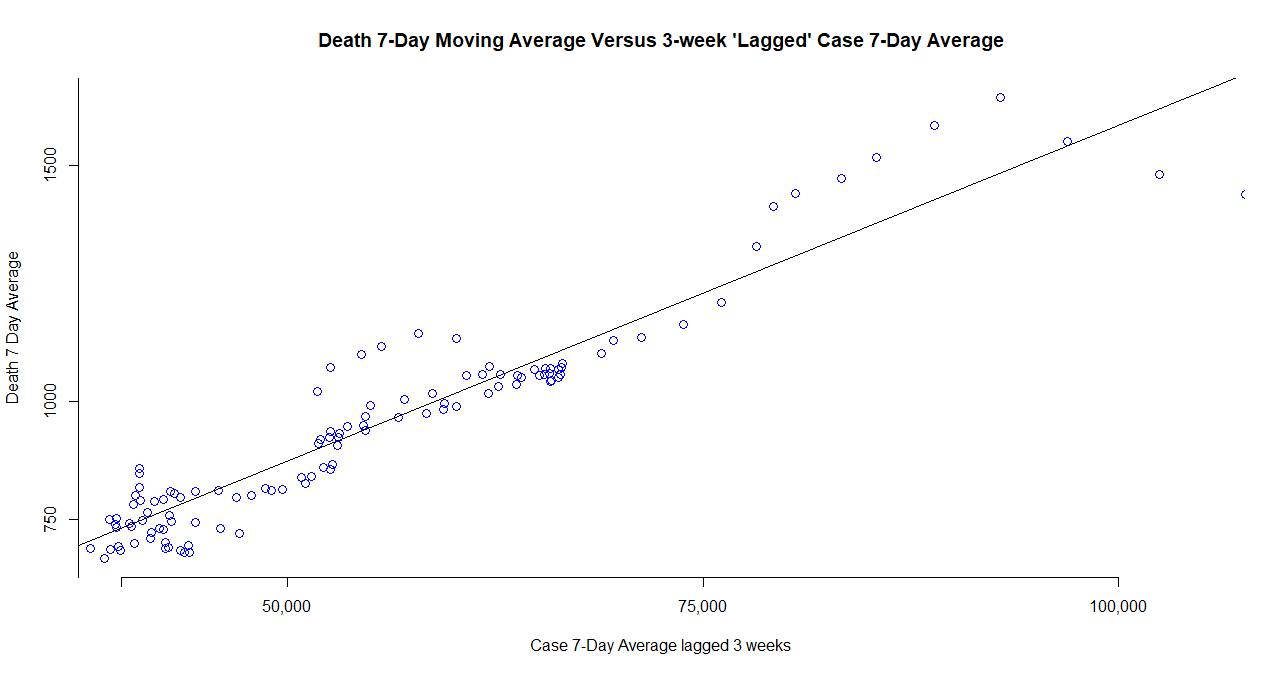 Since we know the number of confirmed cases in the last 3 weeks, we can estimate fatalities for the next three weeks using the CFR (since cases today tells us about deaths in 3 weeks).  Using a CFR of 1.7%, I estimate there will be nearly 50,000 deaths from COVID between 12/1 and 12/18.  If COVID cases have peaked as of today, so we have a slow decline in cases the next couple of weeks, we would still have 85,000 deaths by the end of December.  A slightly more conservative view of CFR (assuming it is closer to 1.5%) would still put the number of deaths in December at 70,000 deaths.

Could it be much lower?  We are in unchartered territory in terms of cases, so while the CFR has been a consistent 1.7% for months, it could be that the huge changes in confirmed cases recently mean we are doing much more testing, so perhaps the CFR will drop dramatically in the coming days.  Places that test more, like NY and CA, have much lower CFRs.  NY and CA currently have CFRs of around 1.4% and NY was below 1% for virtually all of September and October, before rising in November.
Unfortunately, there is reason to believe other states will not have CFRs like NY and CA anytime soon. Why do I say this?  Because the NY and CA low CFRs come with the lowest positivity rate (percent of people tested who test positive for COVID).  This indicates NY and CA are testing much more than other states.  The positivity rate is still above 5% and sometimes even above 10%.  The graph below shows the positivity rate in the 11 states that had at least 5,000 new cases reported yesterday.  NY and CA were the lowest (at around 3% and 6% for NY and CA, respectively), and 8 of the 9 remaining states had positivity rates above 10%.  The rates seem to have peaked in most places, meaning that if there is not a Thanksgiving surge, cases and deaths may be at or near a peak, if Thanksgiving and colder weather does not change things in the other direction. 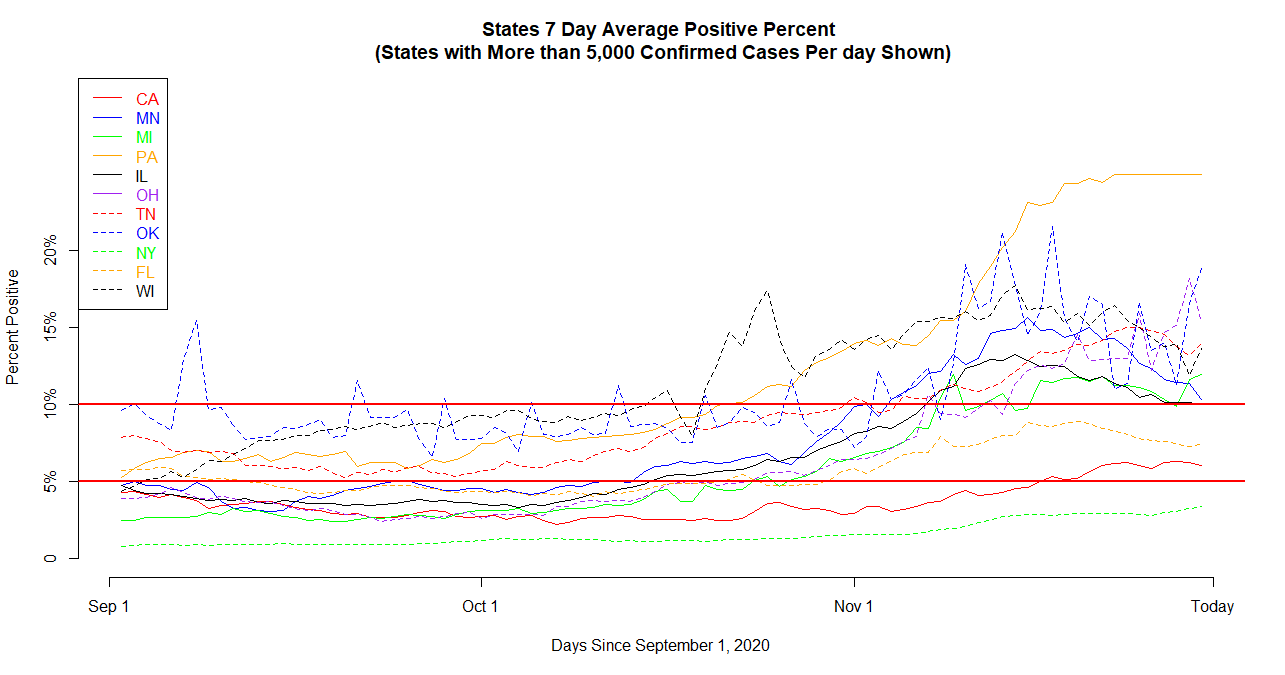 So what's the take away?

We are going to have a terrible December in terms of US COVID deaths, with the only bright spot being that recent positivity rates have leveled out and even fallen, indicating that, pre-Thanksgiving, cases may have begun to fall again.