The CDC issued vaccine priorities recently.  The first phase includes, broadly speaking, hospital and nursing home healthcare workers.  The logic of this is that a) these workers could potentially infect others if not vaccinated, and b) we increase hospital capacity when healthcare workers are not out sick from COVID.  I am assuming in the discussion below that this phase is complete and focusing on the next phase.

The next Phase, called Phase 1B, includes those over 75 years old and frontline essential workers (including, for example grocery store workers).  According to the CDC, this group comprises about 50 million people (see this link).  A little less than half of that group comprises people over 75.  Given the paucity of vaccine at this moment, we cannot vaccinate all 50 million at the same time.  It will take many months to vaccinate this group, and, even if we ramp up vaccinations to a couple million a day, it will still take about 2 months.

So how do we prioritize within this second group?

I argue it should be strictly by age (thus covering the frontline essential workers after the 75+).  Why?

One of the things we’ve known from the start about COVID is that it takes a much greater toll on older people, in terms of severity of sickness and death.  This difference by age is so large that it far outstrips almost all other co-morbidities, and outstrips the increased risk of being more exposed as a frontline worker.  For example, differences by race and income can mean up to an almost two-fold increased risk, while co-morbidities like obesity, diabetes, high blood pressure, and cancer also all carry increased risk between 2 and 4-fold the average risk.  However, being 75-years old (versus 50) carries 10 times the average risk.

To better understand the differences by age, the table below shows the numbers of deaths from COVID per million people in the United States, by age. 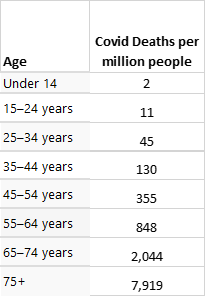 There are over 50 million people under age 14 in the U.S., and therefore, the 2 deaths per million shown in the table translated to about 100 COVID deaths in 2020.  For the 75+ group there are around 23 million people, and the 7,919 deaths per million translated to about 200,000 COVID deaths in 2020.  These dramatic differences should guide states considerations regarding who gets vaccinations in the second phase.

Strictly from the perspective of saving lives (and prior to any considerations of herd immunity), the best way to save lives is to vaccinate old to young.  Suppose we do not want to strictly follow this, because we believe that some frontline workers, who have been risking infection every day, deserve to cut the line.  In that case, we can consider the relative risk in making the determination of who can cut the line. 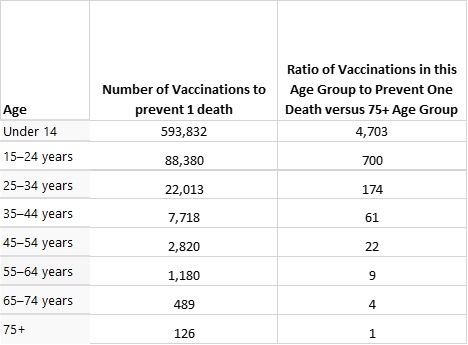 Thus, for example, had we vaccinated 126 people in the 75+ age group pre-COVID, we would have saved one life.  In order to save 1 life in the under 14 age group, we would have needed to vaccinate nearly 600,000 people.  The second column in the table looks at the same data a different way.  It shows that in order to get the same life-saving effect of one 75+ person being vaccinated, we need to vaccinate 4,703 people under the age of 14.  Now this table does not take into account life expectancy, but even accounting for years of life saved, it is always better to give the vaccine to those over 75 first, and the differences are still large.  For example, the 35-44 year old group would still need 15 times as much vaccine as the 75+ group for each year of life saved (so it does drop, from 61 to 15, but it is still a very large difference).

Therefore, if we want to maximize either lives saved or years of lives saved, the choice is very clear: vaccinate by age.

Now, that we have a very clear choice and statistically based argument for vaccinating by age, I will cloud it up a bit. Consider that behavior can affect chances of infection, and that 75+ people can avoid infection by isolating (and keep in mind that I’m assuming Phase 1a has already covered those older people who are in nursing homes/long-term care and thus cannot prevent some exposure).  So now the question can become whether we vaccinate, say, grocery store workers, who have no choice but to expose themselves to risk, but have relatively little risk, or 75+ people, who can more ably control their risk but who have much more risk?  Given the risk differential, I still think the 75+ group is the right group, but I offer a second alternative: vaccinate both groups at once, but ask those in the frontline workers group who are younger (<55 or 65 maybe?) to delay their vaccination voluntarily until all 75+ have been vaccinated.  Surely, some will jump to get vaccinated right away but perhaps a large number will make the choice to wait until their elders are in the clear.

The Vaccines: What do the Numbers Tell Us?

How bad will December be?