Which state is the next New York, continued.

New York has by far the most deaths, followed by Washington State, but Washington won't be the second state to hit 1,000 deaths.  Here's why.

Why not?  As I said in a previous blog, it's all about exponential growth.  Washington State is growing the slowest among the four states with the most deaths.

The graph below shows deaths by state (from the first day I have data for each) on a log scale.  The dotted straight lines indicate the estimated rate of exponential growth.  You can see the New York's line hits 1,000 first, in only 2 or 3 days from now (most likely it will happen this weekend).  Next is Louisiana, which will occur in about 6 days.  The California and Washington rates, still exponential (because they are a line and not a flattening curve), indicate that it will be about 2 more weeks for those states to hit 1,000.

Since death follows infection by a couple weeks or more, and most restrictions and closures were put in about a week ago, there is some hope that it will be more than 2 weeks before CA and WA see 1,000 deaths. 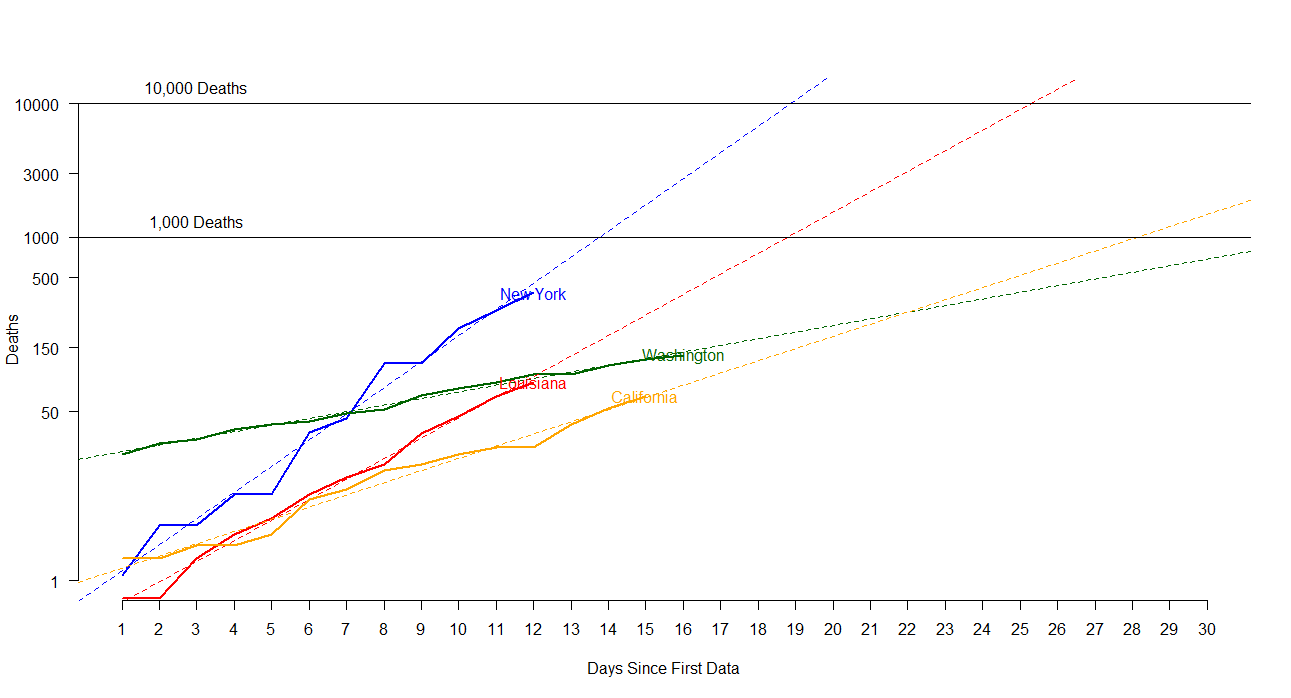 However, NY and LA are almost sure to hit 1,000.  While 1,000 is terrible, 10,000 in a state is catastrophic.  Unfortunately, when you have exponential growth, the jump from 100 to 1,000 takes the same amount of time as 1,000 to 10,000.  For NY, this is estimated to be about 6 days.  If that comes to pass, New York would be at 10,000 next weekend.  However, I think there is reason to be hopeful (at least a little), that closures around March 16 were effective and thus the number of deaths will slow in the next several days.  I have less hope for Louisiana, which only very recently closed essential businesses.  Even though their rate is on par with NY now, I fear Louisiana's deaths may soon be not far behind New York's.

Before you get too comfortable about WA and CA, even their "slow" growth will hit catastrophic levels fairly soon (in a month or so) if it continues.  The key to stemming the pandemic is for exponential growth to end.  That is all about reducing R0 to below 1, a topic I'll discuss next time.