My predictions, which were from modeling the simple relationship of deaths to cases three weeks prior, were fairly accurate.  The only under-prediction was Texas, which seems to have returned to its predicted numbers.  See below for actual (solid line - as of today) versus predictions (dashed - as predicted two weeks ago: https://salthillstatistics.com/posts/81) .

So now most outbreak states of two weeks ago have leveled off or started to decline.  This could mean one or more of a few things: a) the age distribution of infections has changed considerably since March, and now younger people are getting it and not spreading it to older populations, b) our treatment has improved/hospitals are not overwhelmed; thus, fewer are dying, c) more generally, whatever measures we are employing like continued social distancing, fewer indoor activities, and mask-wearing (inside -- outside doesn't matter) are keeping the reproduction rate near or below 1.  Likely it is some combination of these.  This is good news. For example, Florida, with about the same population size, but with more older people, looks like it will fair far better than NY (right now it is at one-fifth the death rate, so even if total deaths there double, it will still be less than half of NY).   What of the next few weeks?

I used the same model--merely looking at deaths the last few weeks versus cases three weeks prior (note that I added Georgia and removed Louisiana in honor of Georgia's school reopening).  It looks like all the states have hit their peaks, though Texas may have another short surge, if their numbers can be believed.  See the graph below. 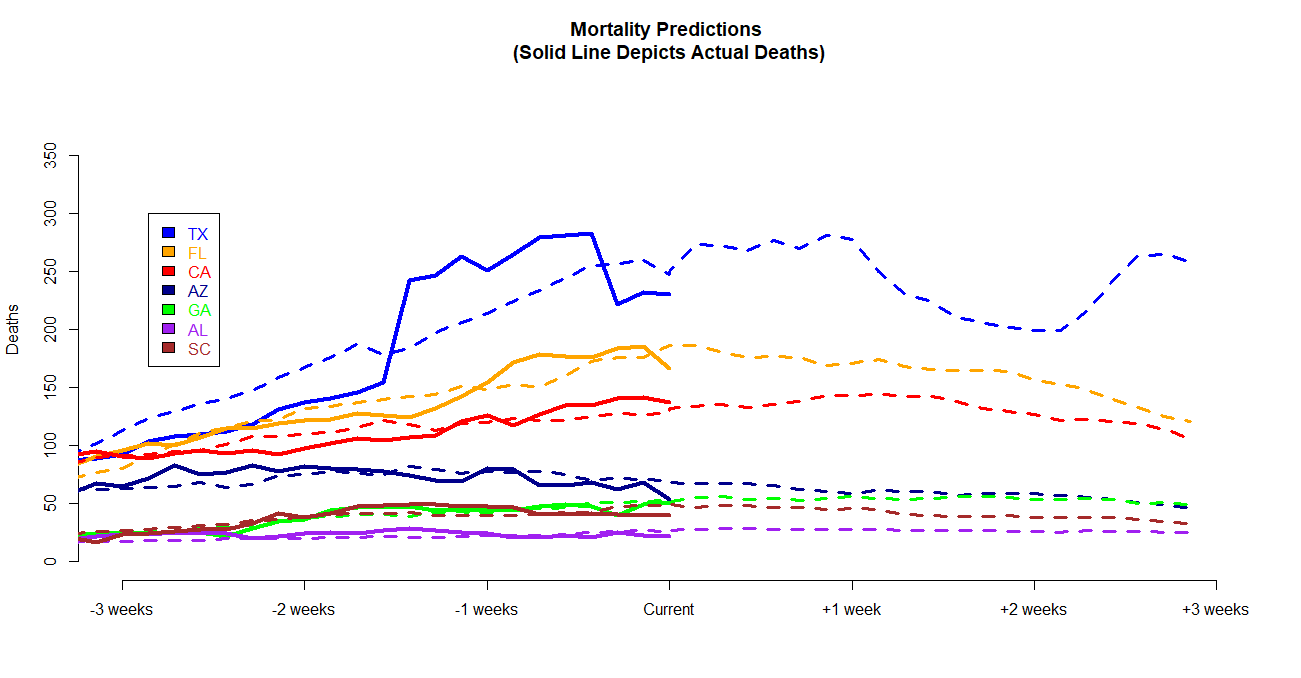 My conclusion: the latest outbreak has ended.  Will the reopening of schools spark another?  My guess is that it will not, for the same reasons that cases have already peaked: young people do not get very sick, and many people, especially susceptible ones, are generally being more careful.  But only time will tell.