Will a "Second Wave" Close Schools before they open?

New York City's virus rate has ticked upward.  DeBlasio, predictably, has blamed the Jews.  This unfortunate singling out of one community ignores the fact that most areas have seen an uptick at some point in the last several weeks.

The graphs below show the 7-day moving average of the percent positive for the 11 counties with the most testing in NY State (the city and state do not provide data by zip code, so it is impossible to track outbreaks more locally). 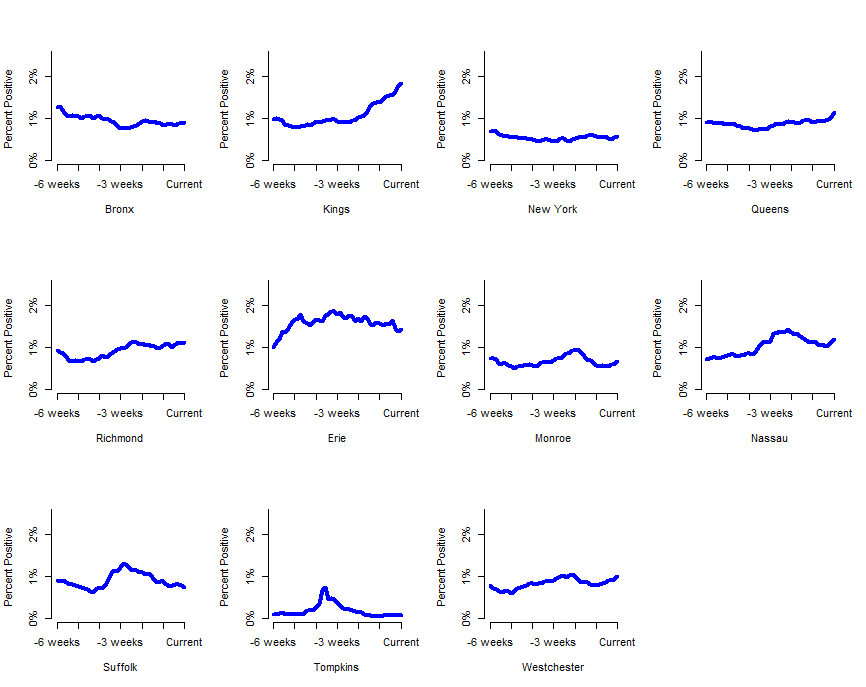 Many of the counties outside the immediate area -- Tompkins, Suffolk, Erie, and Monroe, for example -- saw rates rise weeks ago, only to fall again.  Brooklyn's rise also appeared to begin weeks ago but has not yet hit its peak.

Why is this increase going on?

Schools.  It may be because school began a few weeks ago in most of New York, bringing people back home and together.  Although the spread within schools is likely low, parents and families getting together more is also inevitable with the start of school, and with that an uptick in virus rates.  If that is the case, we can expect the Brooklyn and Queens increase to continue as schools open.  Private schools (and yes, this includes orthodox yeshivas) opened weeks ago, so the increase has already begun.

People started to gather indoors.  A week ago, we had some very cool weather here--that may have brought groups inside who were getting together outside.  Also, after a summer of successful picnicking, people might start to figure they can hang out more indoors (and they probably can, but there will also some increase in rates as a result).

Everyone came home.  In the city and elsewhere, people who had been away the whole summer returned.  Some quarantined, but perhaps others did not.

Compliance with mask rules outdoors? I don't buy this argument because there is no evidence for it -- no evidence that compliance has actually fallen, no evidence of significant infection outdoors, and no evidence of a reduction with masks (see my earlier post: https://salthillstatistics.com/posts/74 and this recent study showing no link between mask compliance and infection rates generally : https://www.cdc.gov/mmwr/volumes/69/wr/pdfs/mm6936a5-H.pdf .  Complaining about mask and social distancing compliance has unfortunately become a handy excuse for the lack of leadership on testing -- something that could actually stem infection rates.

What can we expect?

New York City has the distinct advantage of having had the highest virus attack rates of anywhere in the world.  This is good news, because it means that while we may not be at herd immunity, we are certainly closer than most places.  This means that our second wave, if it materializes, will be much less severe than the first.  With far less awareness, this was almost categorically true for the 1918 flu.  Areas that experienced a severe outbreak did not experience anything near it in the second wave (John Barry's book The Great Influenza discusses this fact).

Even with more indoor congregating and restrictions slowly getting lifted, there are still basically no opportunities for super-spreading.  If you are concerned about a return to indoor dining, look at what happened weeks ago when the rest of New York state began indoor dining: perhaps that was one of the causes of an uptick, but virus rates quickly settled back down.

Will Schools Re-open only to close again?

I hope not, but this is almost a purely political question.  Why?  Because the city has set the maximum positive rate at 3%, after which schools are closed again.  We are close to that now, and DeBlasio can easily keep the rate at 3% by testing less, or focusing testing on clusters where we know there are outbreaks (which is not a bad idea in and of itself, but it does rig the numbers).  Keep in mind that the positive rate is far above the actual percentage of people who have COVID and it is highly dependent on the amount and nature of testing done (see my earlier post https://salthillstatistics.com/posts/76 ).

In any case, it is likely that if we stay the course and open all schools by Friday, whatever uptick we are seeing or will see in the next couple of weeks will likely subside over the next few weeks. I hope our leaders have the wisdom to keep our children in school.