Four Graphs that Show the Pandemic has Peaked. Is it time for another lockdown?

One of my friends from grad school (James Kuczmarski) absolutely hated the dark days of winter.  Knowing this, I walked over to his cubicle on Dec 21 (the winter solstice) to check on how he was doing.  The following conversation ensued.

Me: How are you holding up?

Me: Wait, what?  It's the shortest day of the year, with a long winter of short days ahead.

James: Yes, I know, but every day from now until June will be lighter than the last.

We are just past the COVID winter solstice.  Families gathered indoors for the holidays (Thanksgiving/Christmas/New Years) and cases rose.  But now we have peaked (around Jan 7) and everything points to a long-term decline and the end of COVID as we know it.  But like the winter solstice, there will still be many dark days ahead as things (only) slowly get better.  For that reason, it might be a good time for a lockdown.  I'll get to that below, but let's first look at the four horses of the coming reverse COVID apocalypse.

Cases. Let's begin with cases.  You may have seen in the news that confirmed cases have dropped over the last couple of weeks.  I estimate actual cases rather than confirmed cases but the story is the same.  As shown in the graph below, we hit our peak a couple of weeks ago, close to 1 million new cases a day, and it has since dropped to about 700,000 per day (all figures are 7-day daily averages, which smooth out effects of shoddy reporting on weekends). A lot of this drop is due to California finally turning the corner and I expect that although it will continue to drop, the decrease will slow. 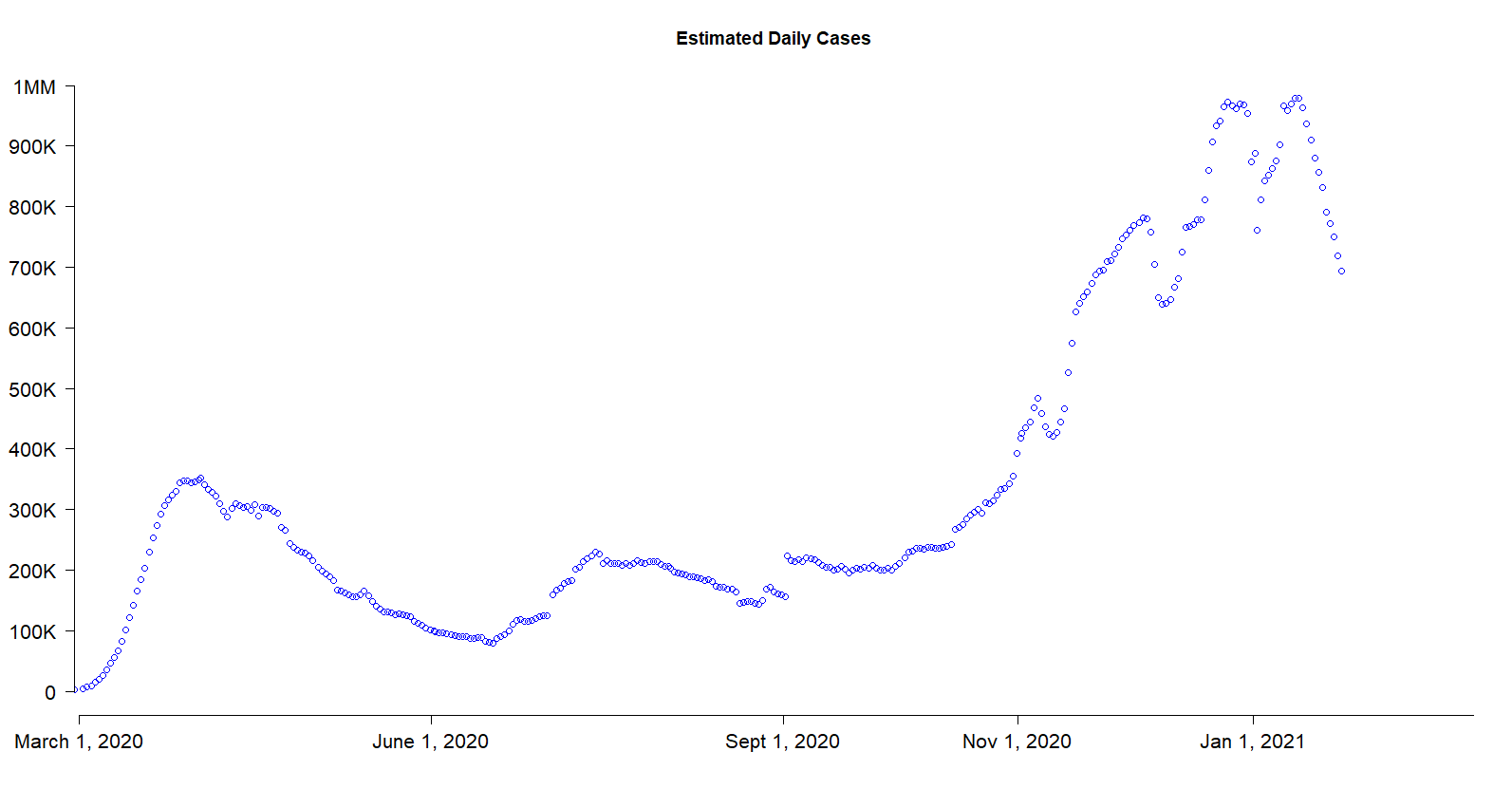 Percent Positive. Over a short period of time (a few weeks or a month or two), the change in percent of people getting tested who test positive is a good indicator of the direction of infections.  Over a longer period, this percentage can change for other reasons, as we test a broader (or narrower) range of people.  At the start of the pandemic, only people with symptoms were being tested, and sometimes not even all of those.  Now, there is broad testing that includes people who just want to get tested, people who have traveled, and people who have symptoms.  There has been little change in the total number of people tested in the last couple of months, so the recent decline in percent positive is another indication that the number of cases is declining. 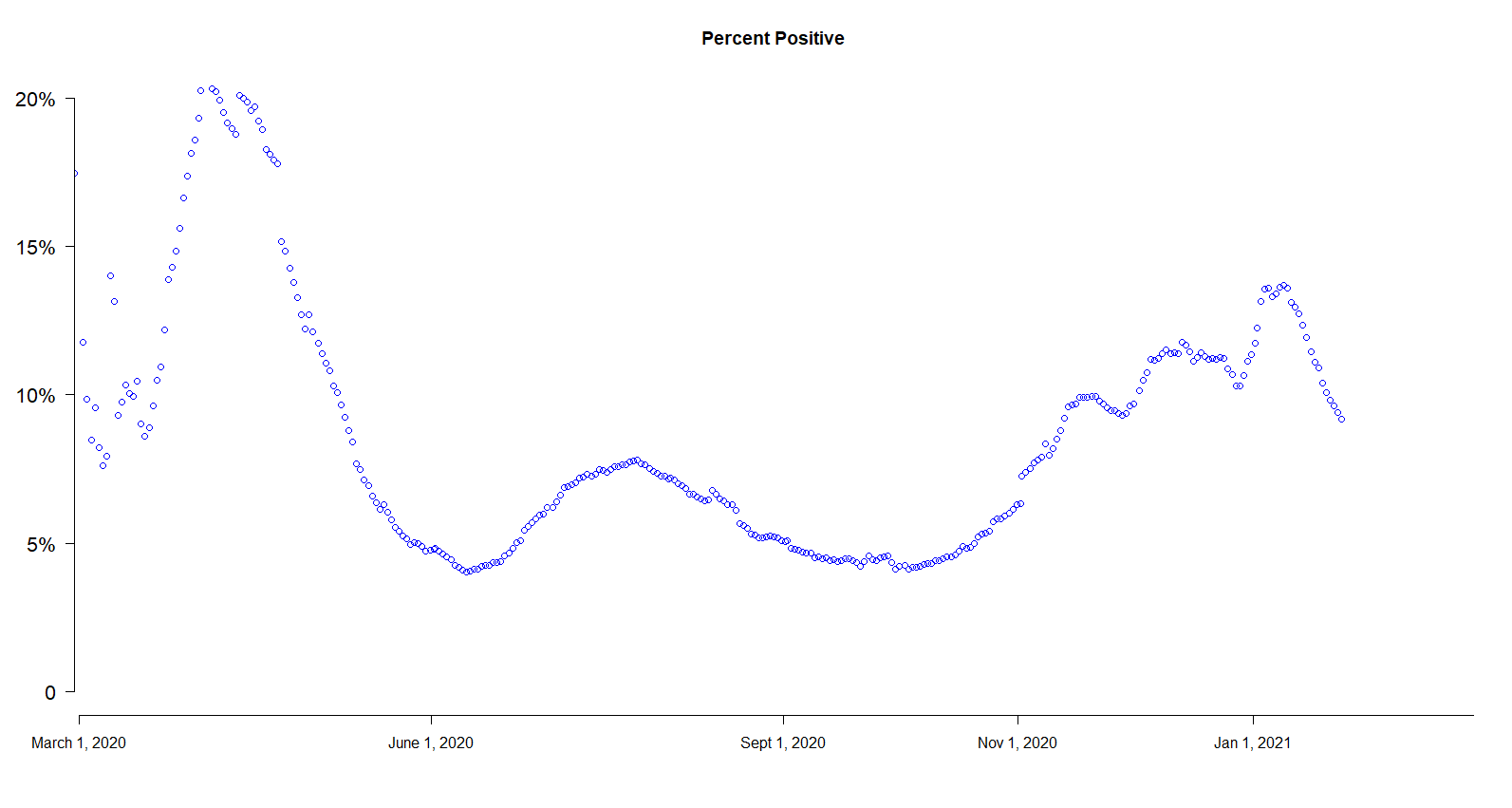 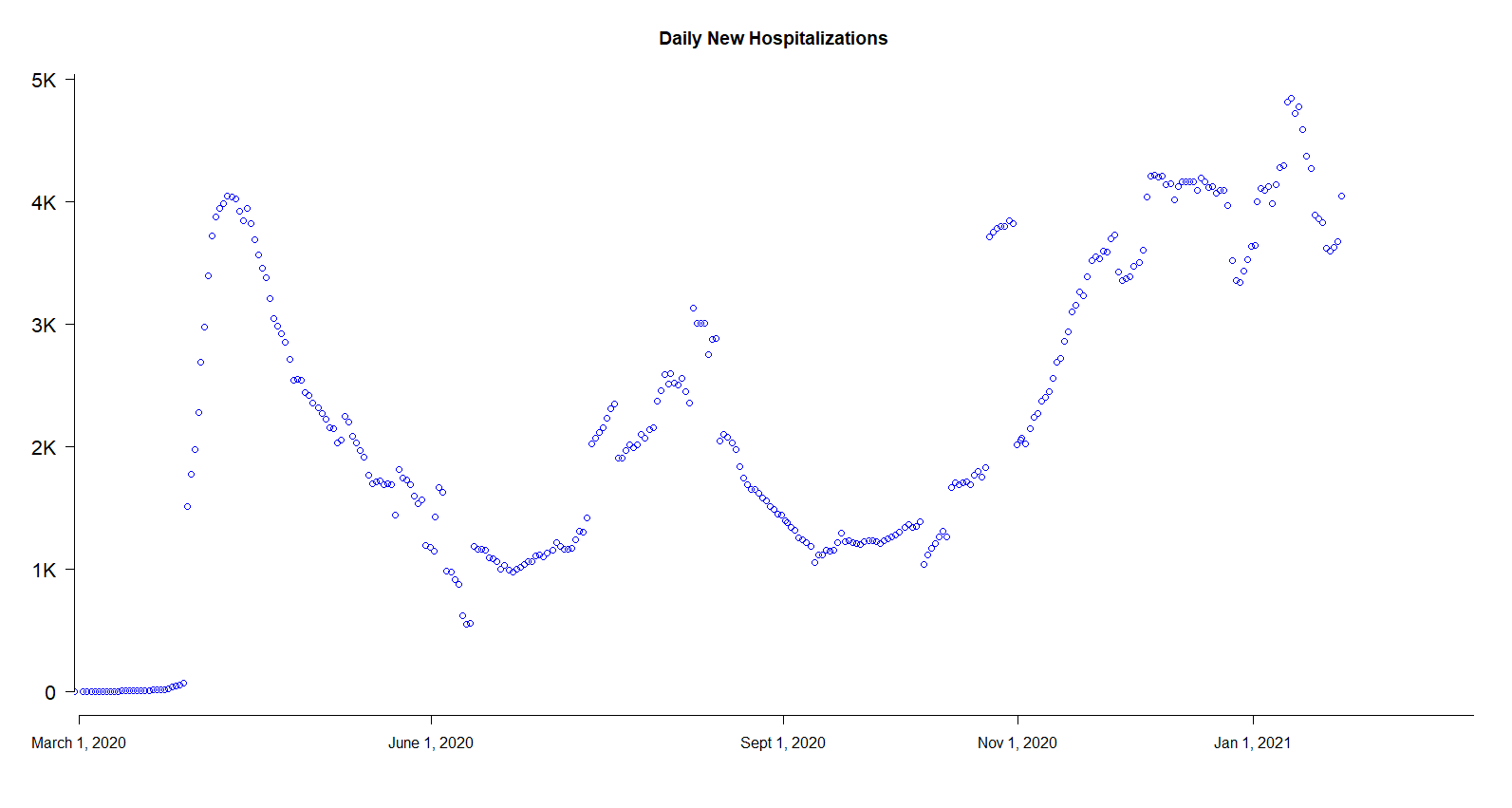 Deaths.  By my estimate, the typical time to death of people who contract COVID and die is a few weeks.  Thus deaths are also a lagging indicator.  The bulk of deaths we are seeing today were people who contracted COVID around New Year's.  Deaths have peaked and maybe even started to decline, or they may bounce around at the peak for another week or so.

In addition to cases counts, and the accompanying indicators of cases, there are two other important indicators that the worst is (just) behind us.

First, a lot of people have gotten COVID.  My best estimate is 112 million people in the US, and is based on a declining death rate that started at 0.6% and fell to 0.35% in the last several months.  These death rates estimates are slightly higher than most people believe, meaning my 112 million estimate is probably too low.  By the way, a recent model from Columbia U put the lower bound at 105 million (interesting article and model here estimates at least 105 million).

With around 100 million or more infected, we have about one-third of the country.  This means the R (reproduction rate: see my prior post: https://salthillstatistics.com/posts/66 ) is well below what it was when the disease was new and is approaching herd immunity.  The combination of continued restrictions and a large number of infections over the last year means the R in most places is below 1.  This means rates will continue to decline unless there is another shock (big holiday, massive influx of people, sudden re-opening in places that still have restrictions).

Second, we have the vaccine. After a slow start, we are now vaccinating about 1 million people a day in the US.  Production levels currently support about 2 million shots a day and will soon (late February) support about 4 million shots a day.  While I hope we will get to even more shots, the 200 million shots we should be distributed and hopefully shot into arms (meaning 100 million complete vaccinations) will be enough to vaccinate everyone over 65 (55 million people) and healthcare workers (about 20 million) by the end of March.  The 65+ group accounts for about 80% of deaths, so assuming most of them are vaccinated, deaths will fall dramatically by the end of March, even with no decline in case counts.

So why consider another lockdown?

So why bother with a lockdown (lockdown will be my shorthand for serious restrictions--I do not believe in complete lockdowns in the sense that NY attempted to do and in the sense that China and parts of Italy actually did)?  I believe lockdowns can accomplish 3 things:

1.  Early on.  To prevent the disease completely when there is an isolated outbreak affected a town or city.  A lockdown allows the disease to simply die out if the outbreak is quickly isolated.  This is a true quarantine, and has worked for many diseases.  It's way too late for COVID of course, and by the time we knew much, it was too late here, even had we been more competent. However, the early lockdowns also bought time, and during that time we figured out how to treat the disease.  Death rates from infection were much lower by last summer than they were last spring.

2.  Prevent hospitals and healthcare systems from being over-run.  Lockdowns work to reduce disease.  There is no doubt about that.  So, if hospitals are beginning to get full (and it needs to be done early), a lockdown can prevent them from being overwhelmed.  These lockdowns met with some success, but were late in parts of the Northeast, and, more recently, in parts of California (North Dakota, whose system was somewhat overwhelmed, sadly never really tried).

3.  To delay infections even when hospitals are not overwhelmed.  In my opinion, this third option is a waste of time early in the disease, because you cannot keep it up for months and months, and so the disease will just return.  We saw this happen almost everywhere in the country, from blue states with restrictive policies that kept lockdowns for longer to red states with less restrictive ones that removed lockdowns sooner.   The net-net, across the country and without any real exceptions, is that COVID came back whenever the lockdowns ended and death rates slowly rose.

So the third option is useless when the time horizon is long.  But right now, such a delay can be hugely helpful.  If we steepen the current downturn by enforcing much stronger restrictions for a few weeks, we can get millions more vaccinated, especially the susceptible, and when COVID slowly begins to rise again, it will be much less deadly, and wont come back as strong because we will be closer to herd immunity by then.

The article I mentioned earlier models the possibilities of stronger immediate restrictions (see here).  The model finds that under any scenario, COVID will all but disappear in July (the model assumes we vaccinate almost everyone over 18 by then). If we keep current restrictions through July, the model estimates will have about 50 million more infections by then.  If we instead have a short strengthening of  restrictions, starting now and for 3-4 weeks, total new infections will drop by close to 10 million, even if we lift all restrictions by the end of February (and a third model, which keeps strong restrictions in place through July, would result about 20 million fewer new infections).  Given our vaccination scheme, the quick strengthening would prevent most of the deaths, even if we removed all restrictions afterward, because the lockdown  would give us time to finish vaccinating most of those who are highly susceptible to dying from COVID.

I do not believe that any state will strengthen restrictions, unless virus rates go up, even though now one of the few times in the last year when a short lockdown could save many lives.  However, we can be hopeful that even without out any strengthening of restrictions, the pandemic is waning in the US.