Effectiveness of long-term Lockdowns, and other Myths

One of the things that has irked me from near the start of this pandemic is the approbation showered on Cuomo and other governors who took a long-term, harshly restrictive approach.  To be sure, in early March 2020, I said that we are in trouble without extreme measures (see https://salthillstatistics.com/posts/56 ), so I was not unhappy when NY and other places initial closed schools and business except for essential workers.  But I also thought long-term lockdowns would be horrible and unsustainable.

[As I said in my last post (https://salthillstatistics.com/posts/96 ), lockdowns are good in three instances: 1) to prevent spread altogether when isolated (never possible by the time we got our act together, and probably simply never possible) 2) to buy time so our healthcare workers and system are not overwhelmed and we can find treatments, 3) Now, to accelerate the current decline, so we can have many more vaccinated in a few weeks and thus prevent many deaths.]

Virtually no state completely ignored the virus, and, to be clear, I do believe doing that would have resulted in fairly devastating impacts.  But states varied greatly in how long and severe their closures were.  This is where I believe it just didn't matter, which of course argues for short closures rather than long ones.

To study this with the data, I used as a imperfect measure, the political leanings of the electorate, because blue states generally had longer and more severe lockdowns and red states generally had shorter and less severe ones.  To compare the Democratic-leaning states to Republican-leaning states, I used Biden's election vote percentage.  As a measure of how bad COVID was, I used deaths per million people (this naturally adjusts for population).

The U.S., on average, has had 1,360 deaths per million people from COVID, meaning 0.136% of the US population died from COVID in the last 10 months. The deadliest state per capita was New Jersey, with 2,416 deaths per million (many may think South Dakota is the worst, because that's what the news is telling you -- it's high but not in the top 5).

But back to my simple model.  I did a statistical regression of Deaths per Million on Biden voting percentage and found...virtually no correlation.  See the graph below, where the solid line is the best estimate of the relationship, and a flat line means no relationship. 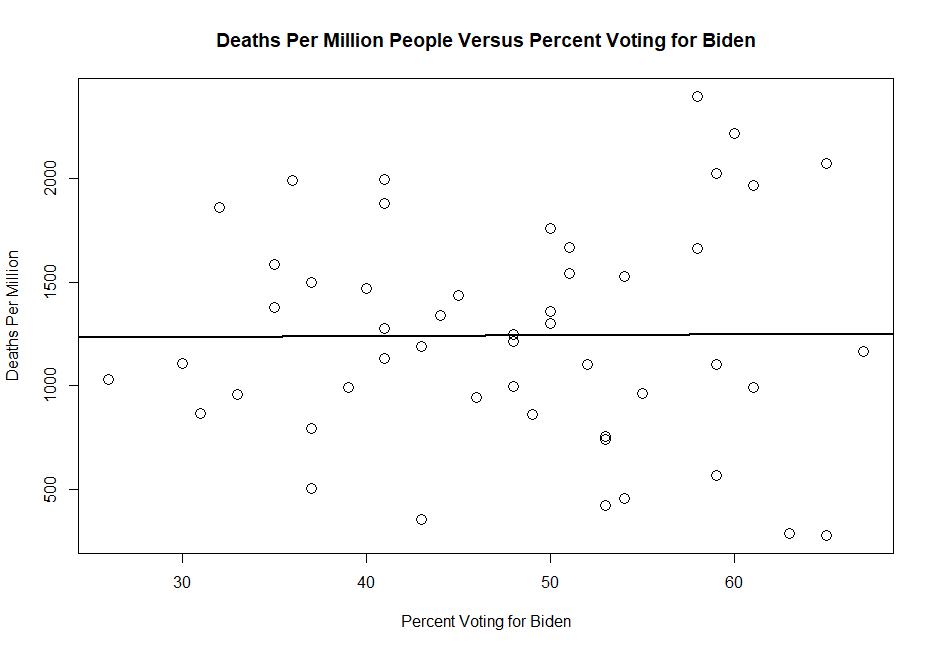 So the political theory (various forms of which amount to "if it weren't for the Republicans, we would have had far fewer deaths"), very dear to the left, is just a myth, it seems.  When I threw population density into the model, along with date of first death and average temperature, the Biden vote still wasn't very informative significant, but the overall model did improve some with these additional variables.  Here's the graph of the model with all four of those variables. 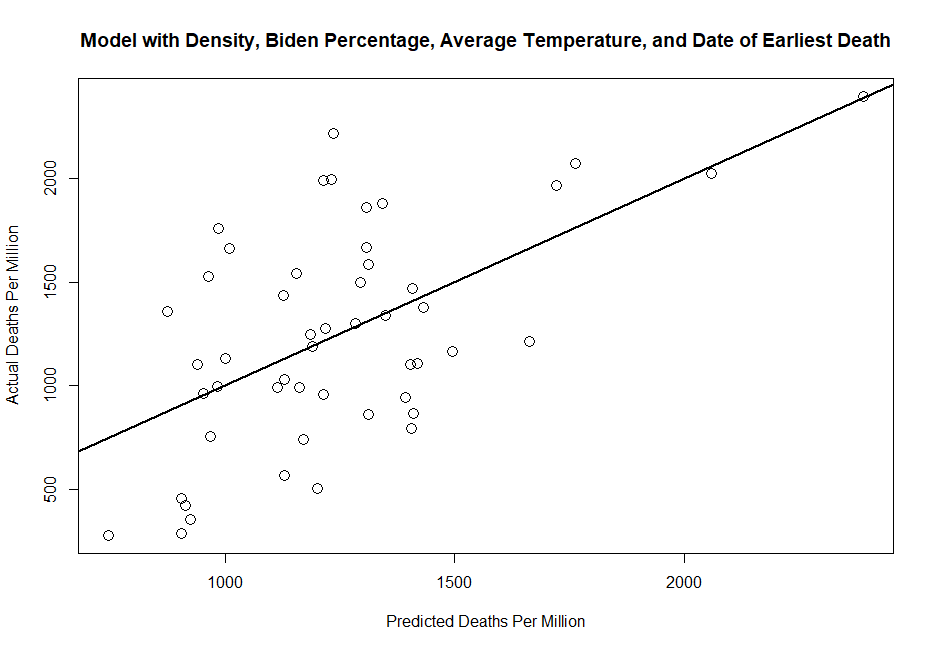 With these extra variables we are a lot further along, but we are still far from a good death model.  In a good model, most of the points would be very close to the regression prediction line shown above.  So let's look at the best and worst states, after accounting for density and these other factors.

The worst state is New York, meaning New York's actual deaths per million, at 2,220, were the furthest from its predicted deaths, which were 1,236 deaths per million.  So, based on these factors, New York really screwed up, managing to have the harshest long-term measures and the worst death-rates, after correcting for density, its democratic leanings, its early virus cases, and its climate.  I do believe that by not closing down earlier, New York had a much worse death rate (but this also the likely reason NY stayed closed for too long).  I blame the  mayor and governor for the late closure, as their health authorities (and me, of course) were telling them a couple weeks before to take drastic measures.  And I blame them for the length of the closures, and especially the school closures, as they ignored the science again and went with what they thought was politically best. By the way, I don't *entirely* blame the politicians on NY's high death rate-- it was surely also bad luck.  Keep in mind that the model takes density into account, so it is not simply about New York's population density, and NJ, with higher density and a higher death rate, had about the number of deaths predicted by the model.  But NY's long-term closure (not the short-term one in March through late May), which basically continues to this day, did virtually nothing.

The second worst state was South Dakota. South Dakota had nearly 2,000 deaths per million but was expected to have around 1,200, after correcting for the factors mentioned above.  South Dakota is kind of the counter-point to NY.  They just never bothered to close, long or short, until they were really at the abyss, and I'm not sure they even closed then.  I do think South Dakota could get blamed perhaps a little more than NY, because they saw what happened everywhere else, whereas a short but early closure in NY would have been a very bold political step.

Which state did the best?  It was Utah, with a predicted 1202 deaths per million, about 700 more than their actual, which was 500 deaths per million.  Maybe prayer really did help there?   Thanks, Mitt.  The next four "best" states were Alaska, Kentucky, Hawaii, and Washington, about 600 deaths short of their prediction.  The low numbers for Alaska and Hawaii I attribute to a variable that wasn't in the model : remoteness (can you say "Australia" and "New Zealand"?).  Washington is an interesting case--they had some of the earliest cases and likely the earliest deaths, but were mostly spared, relatively speaking.  At the other end of the spectrum, rounding out the worst 5 states were Arizona, Mississippi, and Illinois.

So, overall, red, blue, or purple state, short lockdown or long lockdown, the virus didn't really seem to care much--eventually it would get to you.  States that let it go overboard before doing anything did see much higher death rates, but beyond that, everything kind of evened out over the year, and continues to now.  The states that are seeing and have seen recent outbreaks, like California and South Carolina, are ones that, until now, were below average in terms of deaths.  Thankfully, their cases are starting to wane now also.

The new CDC data tells us that the vaxed are done with the pandemic, for now.